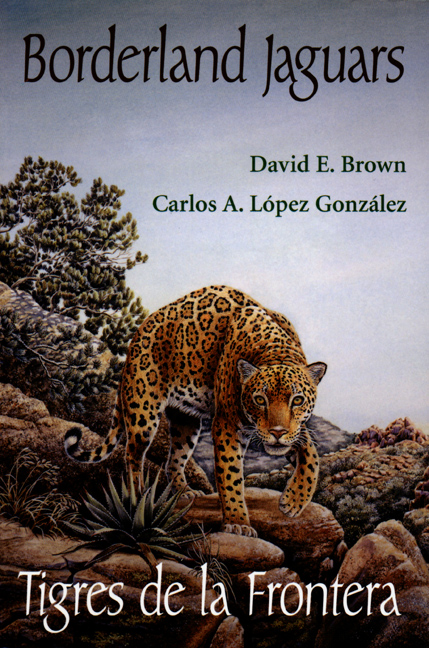 "What is it about these borderland cats which has so fired up people? Scarcity combined with beauty explains some of the appeal. So does the animal’s legendary strength and power as befits its role as the region’s top predator. The jaguar’s neotropical origins also add to its mystique...But there is something more. That such a large cat is out there somewhere...invokes the depths of our imagination. Nor does it matter one whit that the chance of any one individual actually seeing one is almost nil. The thought of such a cat’s presence is enough in itself."—from the book

In 1996 a rancher hunting mountain lions just north of the Arizona-Mexico border treed a jaguar. Instead of reaching for a rifle, the rancher went for his camera. Later that year another party photographed a jaguar in Arizona’s Baboquivari Mountains. These compelling photographs sparked public interest in jaguars and have resulted in calls for listing jaguars as an endangered species.

Borderland Jaguars documents the human-jaguar contact in the Southwest and presents jaguar folklore from both sides of the border. But the book is primarily a natural history of the jaguar, and discusses its distribution, habitats, and hunting and breeding characteristics before concluding with a section on the status and management of borderland jaguars, and a proposed conservation plan. Written in an engaging style, and replete with a wealth of photographs, Borderland Jaguars is a wonderful introduction to this elusive resident of the Southwest.

Carlos López González is a research associate of the Denver Zoological Foundation.

"The work is not only significant, it is an important contribution, because it serves to dispel many myths and misconceptions regarding the jaguar. It will be the major source on the species for many years to come."—Harley Shaw, wildlife biologist