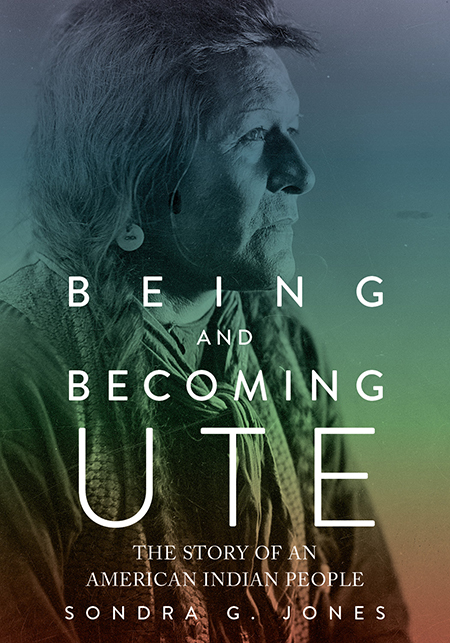 Sondra Jones traces the metamorphosis of the Ute people from a society of small, interrelated bands of mobile hunter-gatherers to sovereign, dependent nations—modern tribes who run extensive business enterprises and government services. Weaving together the history of all Ute groups—in Colorado, Utah, and New Mexico—the narrative describes their traditional culture, including the many facets that have continued to define them as a people. Jones emphasizes how the Utes adapted over four centuries and details events, conflicts, trade, and social interactions with non-Utes and non-Indians. Being and Becoming Ute examines the effects of boarding—and public—school education; colonial wars and commerce with Hispanic and American settlers; modern world wars and other international conflicts; battles over federally instigated termination, tribal identity, and membership; and the development of economic enterprises and political power. The book also explores the concerns of the modern Ute world, including social and medical issues, transformed religion, and the fight to maintain Ute identity in the twenty-first century.

Neither a portrait of a people frozen in a past time and place nor a tragedy in which vanishing Indians sank into oppressed oblivion, the history of the Ute people is dynamic and evolving. While it includes misfortune, injustice, and struggle, it reveals the adaptability and resilience of an American Indian people.
Sondra G. Jones holds a PhD in history from the University of Utah, where she now teaches. Her publications include journal articles and books, including the award-winning Don Pedro León Luján: The Attack against Indian Slavery and Mexican Traders in Utah.
Table of Contents:
Illustrations
Abbreviations
Preface and Acknowledgements
1. Introduction
2. Out of the Desert: The Núu-ci
3. First Encounters: Commerce and Colonialism, to 1846
4. Americans among the Utes: Trade, Trapping, and Trails
5. Colonization: Utah Territory
6. Conciliation and Defeat: Western Utes, 1851–1855
7. Colonization: Kansas/Colorado Territory
8. Containment: Colorado, 1855–1873
9. Conflict and Removal: Utah, 1855–1879
10. Conflict and Removal: Colorado, 1873–1881
11. The Land Divided: Southern Ute and Ute Mountain Reservation
12. The Land Divided: Uintah and Ouray Reservations, 1881–1906
13. Religion and the Perseverance of Identity: 1890–Present
14. Travail: 1895–1940
15. The Struggle for Rebirth and Identity: 1940–1970
16. The Quest for Self-Determination and Sovereignty
17. Uintah-Ouray Utes: 1960 to a New Century
18. Southern and Ute Mountain Utes: 1960 to a New Century
19. Epilogue
Appendix: Historical Nomenclature for Ute Bands
Notes
Bibliography
Index

Praise and Reviews:
“The author has created a superb Ute Indian history. I know of no other works in the fields of anthropology, sociology, and history that present an overview of the Ute Nation with the depth and breadth of Being and Becoming Ute.”
—Gregory C. Thompson, author of The Southern Utes: A Tribal History

“Decades in the making, this sweeping narrative charts the history of the Ute people from prehistoric times into the twenty-first century, showcasing their pragmatic adaptive strategies and exploring their challenges. Jones helps readers to understand tensions and differences of opinion within Ute society between full-bloods and mixed-bloods, modernizers and traditionalists, and the difficulty of maintaining a Ute identity and cultural essence in the face of mainstreaming material and cultural forces.”
—Brian Cannon, author of The Awkward State of Utah: Coming of Age in the Nation, 1896–1945
“In a sweeping narrative that takes readers on a riveting journey across time and space, from the sixteenth century to the twenty-first, Jones produces a beautifully written and thoroughly inclusive cultural history of the Ute people. Centered on the theme of change, Jones abandons any pretense of a pristine ‘traditional’ past to describe in rich detail near constant adaptation over time. Becoming Ute is an exceptional cultural history of an American Indian People.”
—W. Paul Reeve, author of Making Space on the Western Frontier: Mormons, Miners, and Southern Paiutes and Religion of a Different Color: Race and the Mormon Struggle for Whiteness
“Jones’s impressive bibliography includes all of the relevant secondary sources on both Northern and Southern Utes, Indigenous identity, and Indian policy.…Yet her coherently organized narrative never bogs down in tedious details. Indeed, her writing is refreshingly graceful and blessedly free from jargon and needless abstractions. Jones has taken an enormous body of sources and molded them into a coherent analysis of Ute history and identity. It will serve as an important text for those interested in Great Basin historiography in general and the Utes in particular.”
—Journal of Arizona History