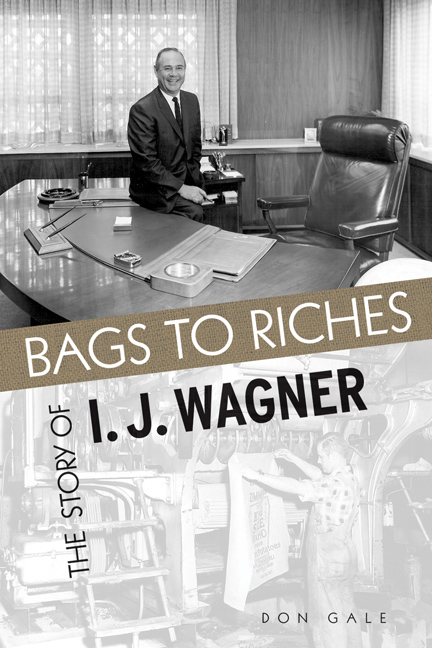 The life of I. J. 'Izzi' Wagner mirrors the development of Salt Lake City during the twentieth century—from poverty and obscurity to affluence and prominence. Wagner was born in poverty, but through hard work, wise management, and good luck, he built a fortune. He also changed the city for the better—leading the movement to eliminate overhead signs on Main Street, opening the southwest quadrant to controlled industrial development, ridding the city center of railroad tracks, funding the Rose Wagner Center for Performing Arts, and using his substantial influence to promote tolerance.
His sense of humor was legendary. His tenacity in pursuit of goals was unwavering. His grasp of past, present, and future opportunities was profound. Bags to Riches shows the personal side of an 'outsider' who became an 'insider' through congeniality, good humor, and integrity.
Don Gale is a consummate wordsmith, having composed in every format from books to broadcast. A native of Salt Lake City, he received B.A., M.A., and Ph.D. degrees at the University of Utah and an honorary degree from Southern Utah University.
Table of Contents:
Foreword by Ted Wilson
Preface

1. From Eastern Europe to Utah
2. The Childhood Years
3. Taking Charge
4. Marriage and War
5. Building Friendships and Business
6. An Offer No One Could Refuse
7. Friend, Partner, Deal-maker
8. The Gadfly
9. Time to Give Back
10. At Peace with the World...and Himself

"In sturdy, straightforward prose, rich with detail and colorful anecdotes from every stage of Wagner's long life. Bags to Riches should prove interesting reading to any longtime Salt Lake City resident, or to anyone who wants to learn more about how the city grew up."—The Salt Lake Tribune

"When I was a young lawyer, I. J. Wagner became my mentor—a role he played for many in the community. The understanding, wisdom, and vision which he so freely shared were invaluable to me. I owe him much. I know others would echo that statement."—Louis H. Callister, past chairman, Callister, Nebeker & McCullough

"I. J. Wagner served on the Zions Bancorporation Board of Directors for thirty-eight years, and made immeasurable contributions to our success. His integrity, his relentless energy and optimism, and his business prowess—all of which were constantly punctuated by his ability to make people laugh—enriched our community and all who knew him"—Harris H. Simmons, chairman and CEO, Zions Bancorporation

"Gale offers rare insight into the waning genre of businessmen who value tzedakah as well as their millions. A good, indeed, a good read."—Utah Historical Quarterly

"Don Gale...had long conversations with Wagner for five years, then made notes on their meetings and collected anything he could to help his story. The result is not an academic biography, but a more personal one, told with warmth, love, and respect. Gale captures the strength of Wagner's legendary storytelling."—Deseret Morning News