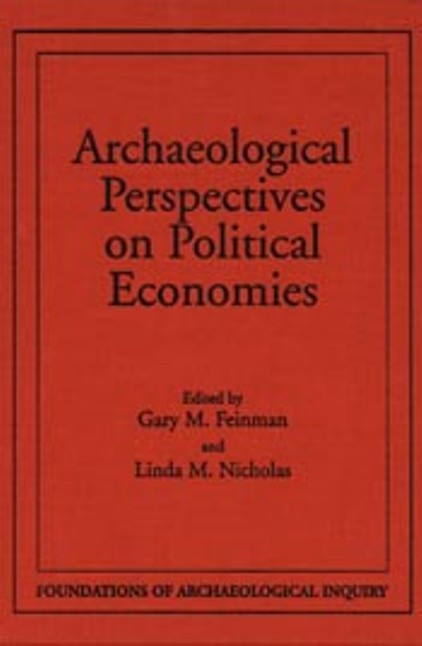 Archaeological Perspectives on Political Economies explores past societies that are characterized by hierarchical organization where the production and circulation of goods transcend domestic units. Based on contributions to the biennial Foundations of Archaeological Inquiry Roundtable, Gary Feinman and Linda Nicholas bring together twelve leaders in the field whose contributions consider such questions as the emergence of rank within a previously egalitarian society, the regional organization of preindustrial economic systems, different modes of craft specializations, and the relation between high-status consumption and long-distance trade.

Areas of study include most of the core areas of early complex society development, and analytical scales that range from domestic units to macroregional networks, demonstrating how archaeological research and data can help explicate the economic intricacies of past societies. The volume reinvigorates the archaeological investigation of preindustrial economies, offering both new theoretical perspectives and new empirical foundations.

Gary M. Feinman is curator of Mesoamerican anthropology and archaeology at the Field Museum in Chicago.

Linda M. Nicholas is adjunct curator of Mesoamerican archaeology at the Field Museum in Chicago.

1. Archaeology and Political Economy: Setting the Stage
2. The Evolution of of Chiefdoms: An Economic Anthropological Model
3. The Economy of the Moment: Cultural Practices and Mississippian Chiefdoms
4. Reflections on the Early Southern Mesopotamian Economy
5. Structural Parameters and Sociocultural Factors in the Economic Organization of North Mesopotamian Urbanism in the Third Millennium B.C.
6. Material Resources, Capital, and Power: The Coevolution of Society and Culture
7. Roman Economies: A Paradigm of Their Own
8. Early State Economic Systems of China
9. Appropriative Economies: Labor Obligations and Luxury Goods in Ancient Maya Society
10. Unraveling the Prehispanic Highland Mesoamerican Economy: Production, Exchange, and Consumption in the Classic Period Valley of Oaxaca
11. Craft Economies of Ancient Andean States
12. Political Economy in the Historic Period Chiefdoms and States of Southeast Asia
13. Comparative Insights into the Ancient Political Economies of West Africa

"The study of ancient political economies has rightfully emerged as a major focus on modern archaeological inquiry, and this highly recommended volume, with its many case examples, is an excellent primer on current thinking about this key subject."—Jeremy Sabloff, University of Pennsylvania