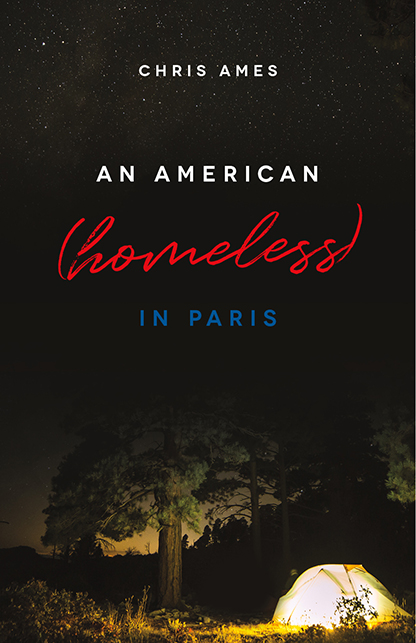 Before a post-divorce road trip Chris Ames had been ensconced in French domesticity, with a wife, two children, and a regular job. Returning to Paris after that trip, he became an American vagabond and seeker who, lacking sufficient means and motivation to pay the rent and invest again in permanence, opted for homelessness. He soon found an unexpected place to pitch his tent—an abandoned golf course. Ames recounts a full year spent living there, with little baggage, through snow and heat, while commuting to his job as an English teacher in the city. Developing his urban-survivor skills, he rekindles relationships, starts others, offers glimpses of Parisian society—homeless and not—and ruminates on direction and the lack thereof.

Ames circles serious questions, rarely losing a sense of irony, bewilderment, or amusement, especially at his circumstances, with their inherent discomforts, risks, and not-so-reassuring self-revelation. As readers see him stumble into renewed social bonds, his skewed searching and unconventional existence will engage and sometimes befuddle them.

“I’m not saying become homeless, but do understand it opens many doors, and helps us appreciate the doors we can close.”—from the introduction

Interview with Tom Williams at Access Utah
Chris Ames was born and raised in Utah, but has spent the past thirty-eight years trying to understand the planet and its people—learning a handful of languages and traveling in a hundred countries. Currently homeless, he was most recently heard from while making his way from Iran through “the Stans” to China.
Praise and Reviews:
“A rollicking, irreverent, politically incorrect, humorous tale. At the heart of Ames’s work is a call for the examination of our lives; of the hustle and bustle, the pressure of modern twenty-first century life.”
—Jeff Metcalf, author of Requiem for the Living
“A highly readable, highly entertaining, and, ultimately, haunting tale. This narrator and the characters who stumble into his close-to-the-earth, close-to-the-bone world are as fully developed as any you’d find in a novel and his language is just as evocative.”
—Rebecca Rule, author of Live Free and Eat Pie! and The Best Revenge