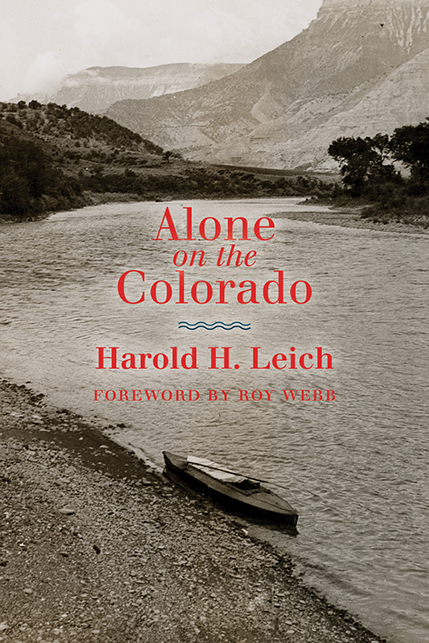 Harold Leich set out on a westward journey in the summer of 1933. His travel narrative details his river trip down the Yellowstone River and the first descent by boat of the upper Colorado River from Grand Lake, Colorado, through Cataract Canyon, Utah. He was the first to push through this entire upper section, running rapids that had never known a paddle, rebuild­ing his kayak along the riverbanks, camping rough, and meeting ranchers and railroad workers in these remote regions. Leich’s sudden change of fortune in Cataract Canyon, in the most isolated part of Utah, and his soul searching as he worked his way out of a perilous situ­ation, will speak to anyone who has ventured beyond roads and trails and faced potential tragedy alone.

Alone on the Colorado takes readers on the adventure of running rivers and riding the rails, while painting a unique and optimistic portrait of Depression-era America.
Harold Leich (1909–1981) grew up in Indiana near the Ohio River, where his love of water and the outdoors began. After his western adventures, he moved to the East, enjoyed a successful career, and raised a family.

Roy Webb is a retired archivist for Special Collections at the University of Utah’s J. Willard Marriott Library, where the writings and photos of Harold Leich are housed.
Table of Contents:
List of Figures
Foreword by Roy Webb
Preface

1. The Spell of Swift Water
2. Bewitched
3. The Source
4. In the Wake of Sam Adams
5. Idylls of a River Rat
6. Swapping Horses in Midstream
7. Ulysses (Junior Grade)
8. Shipwrecked in the Desert
9. Afoot and Afloat
10. Hell or Hanksville
11. Farewell to the Colorado

Afterward: Hal Leich and His Book: A History and a Reflection by Jeff Leich and Harry Leich
Appendix: Reaction of Hal Leich’s parents by Jeff Leich and Harry Leich
Notes
Praise and Reviews:
“Leich has a wonderful, lively style of writing that never gets boring. This book fills an important gap in the river running history of the Colorado. His vivid, first-person account is a great contribution to the overall story of people and rivers. His photographs add to the authenticity of the narrative as well.”
—James M. Aton, author of John Wesley Powell: His Life and Legacy
“This is not just a river story, though that is the highlight. It also details Depression-era experiences, both urban and rural—Leich’s tales of riding the rails are fascinating. Besides being an adventure story, it is also a literary work.”
—Richard Quartaroli, librarian emeritus, Northern Arizona University, and river runner and historian