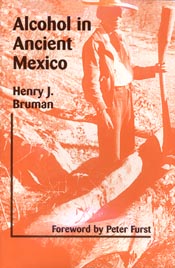 Alcohol in Ancient Mexico reconstructs the variety and extent of distillation traditions in the ancient cultures of Mexico, describing in detail the various plants and processes used to make such beverages, their prevalence, and their significance for local culture.

The art of distillation arrived in Mexico with the Spaniards in the sixteenth century. However, well before that time, native skills and available resources had contributed to a well-developed tradition of intoxicating beverages, many of which are still produced and consumed.

In the 1930’s Henry Bruman visited various Mexican and Central American Indian tribes to reconstruct the variety and extent of these ancient traditions. He discerned five distinct areas defined by the culturally most significant beverages, all superimposed over the great mescal wine region. Within these five areas he noted wine made from cactus, cactus fruit, cornstalks, and mesquite pods; beer from sprouted maize; and fermented sap from pulque agaves.

Outside the mescal region he observed widespread consumption in the Yucatan of a wine made from fermented honey and balché bark, plus lesser-known beverages in other regions. He also observed the frequent inclusion in the fermentation process of alkaloid-bearing ingredients such as peyote and tobacco, plants whose roots or bark contain saponins—which act as cardiac poisons—and even poisons from certain toads.

Previously unpublished, the research presented here retains its relevance today, and the photographs offer a fascinating glimpse at a traditional world that has now almost vanished.

Henry J. Bruman (1913–2005) was professor of geography and chair of the Department of Geography at the University of California, Los Angeles.

1. The Non-Alcohol Region in the North
2. Mescal and Sotol
3. The Northwest Cactus Region
4. Tesgüino
5. Tuna and Mesquite
6. Cornstalk Wine
7. Pulque
8. Mescal and Jocote
9. The Region beyond Mescal

"This is the only book that deals with this important subject, and it is extraordinary in combining classic historical, geographic, and ethnographical perspectives in a systematic way."—CHOICE