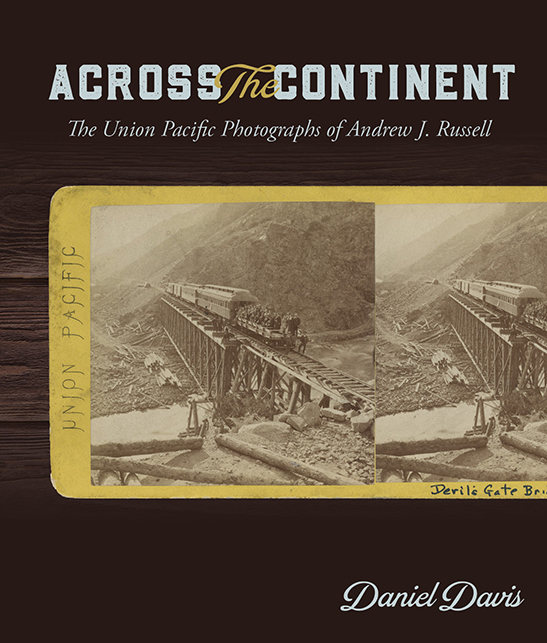 Andrew J. Russell is primarily known as the man who photographed the famous “East and West Shaking Hands” image of the Golden Spike ceremony on May 10, 1869. He also took nearly one thousand other images that document almost every aspect of the construction of the Union Pacific Railroad. Across the Continent is the most detailed study to date of the life and work of an often-overlooked but prolific artist who contributed immensely not only to documentation of the railroad but also to the nation’s visualization of the American West and, earlier, the Civil War.

The central focus in the book is on the large body of work Russell produced primarily to satisfy the needs of the Union Pacific. Daniel Davis posits that this set of Russell’s photos is best understood not through one or a handful of individual images, but as a photographic archive. Taken as a whole, that archive shows that Russell intended for viewers never to forget who built the Union Pacific. His images celebrate working people—masons working on bridge foundations, freighters and their wagons, surveyors with their transits, engine crews posed on their engines, as well as tracklayers, laborers, cooks, machinists, carpenters, graders, teamsters, and clerks pushing paper.

Russell contributed to a golden age of Western photography that visually introduced the American West to the nation, changing its public image from that of a Great American Desert to a place of apparently unlimited economic potential.
Daniel Davis is the photograph curator and associate librarian of Utah State University’s Special Collections and Archives.
Table of Contents:
Acknowledgments
Introduction: The Forgotten Photographer
1. A. J. Russell and the Golden Age of Western Photography
2. Russell in New York and during the Civil War (1829–1865)
3. The Union Pacific and Central Pacific Railroads and the Use of Photography (1862–1868)
4. Russell’s First Trip out West (1868)
5. Russell’s Second Trip West and the Golden Spike Ceremony (1869)
6. Documenting the West (Summer and Fall of 1869)
7. Leslie’s Illustrated and the Market in Photographs after 1870
8. Russell’s Images and the Rise and Decline of Western Photography
Epilogue: The Forgotten Photographs of the Union Pacific, from Obscurity to Rediscovery
Catalog of Russell’s Union Pacific Photographs
Notes
Bibliography
Praise and Reviews:
“In this engaging book, photographic archivist Daniel Davis not only tells the virtually unknown story of railroad photographer A. J. Russell; he also shares Russell’s photographs with readers and helps them better understand the important role played by photo archivists in preserving the past.”
—Richard Francaviglia, author of Over the Range: A History of the Promontory Summit Route of the Pacific Railroad and Imagining the Atacama Desert: A Five-Hundred-Year Journey of Discovery
“Davis gives readers a comprehensive look at who Andrew Russell was and what his movements were both before and after the Union Pacific project. Interesting and well written, the book is both profound and informative, underscoring the cultural significance of these images and of Russell’s body of work in general.”
—Patricia LaBounty, Curator, Union Pacific Railroad Museum
“Daniel Davis does a superb job throughout, and his years of dedicated archival work show, including a much-appreciated index of Russell’s stereographic views for posterity and future scholarship. For those unfamiliar with the history of the transcontinental railroad or the golden age of photography in the American West, this is a good place to start.”
—Great Plains Quarterly