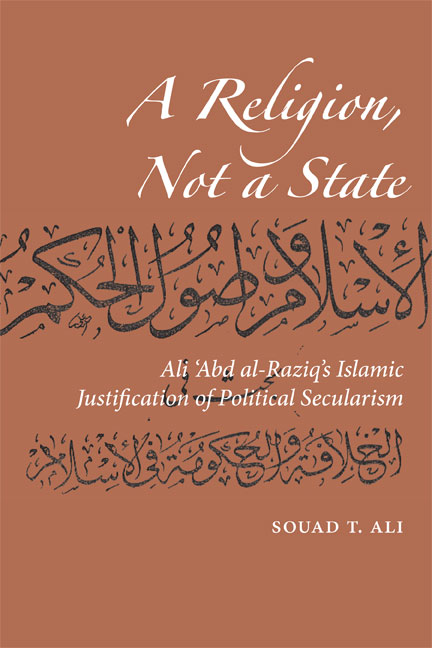 In this notable work, Souad T. Ali examines the seminal writings of Egyptian reformist scholar Ali'Abd al-Raziq, often regarded as the intellectual father of Islamic secularism, and his controversial argument that the caliphate should be considered a human innovation, rather than a religious imperative. 'Abd al Raziq contended that Islam is "a religion, not a state; a message, not a government," a major departure from the traditional view that religious and political spheres are intertwined and inseparable in Islam.

Opponents denounced 'Abd al-Raziq's ideas as a foreign corruption imported from the West.  Ali's careful, objective, and scholarly examination of 'Abd al-Raziq's work, however, reveals that his arguments are not based in Western thought.  Rather, they sit firmly within the dictates of Islam's sacred texts, particularly the Quran and Hadith, and also enjoy considerable support from the historical record.

This analysis critically challenges prevalent misinterpretations of Islam that have endured for centuries.  Ali recognizes the varied models and discourses that have arisen throughout different epochs, especially so the role that Western intervention has played in placing the question of Islam's modernity at the forefront of intellectual debate.  Throughout, the study emphasizes the atmosphere of openness and tolerance that is a requisite for free, intelligent debate.

Foreword
Acknowledgments
Note on Transliteration
1. Introduction: Background and Overview
2. Classical Juristic Theories of the Caliphate: From Idealism to Accommodationism
3. The Caliphate in the Colonial Era
4. Ali ‘Abd al-Raziq’s Position
5. The Central Argument
6. The Ruling System in the Time of the Prophet
7. Critiques of ‘Abd al-Raziqu’s Position
8. The Implications of ‘Abd al-Raziq’s Study for the Debate over Islam and Politics
Glossary
Selected Bibliography
Index

“Ali succeeds in situating the [Islamic secularism] debate in its historical contexts and in lucidly presenting the positions of major players with balance and objectivity. Her writing style is clear and this helps make the material accessible even for someone who approaches it for the first time.”—Mohamed A. Mahmoud, Tufts University

“With its rich historical background and extensive literature review…this book would be an excellent source for students of Islamic political thought…While [Abd al-] Raziq’s ideas were discussed in other important books on Islamic political theory… this book fulfills the need for a more detailed, independent volume.”—Hasan Kosebalaban. Michigan State University

"The author has succeeded in offering a sustained and methodical exposition of the 1925 treatise and 'Ali 'Abd al-Raziq's justification of political secularism."—Journal of Islamic Studies
"Carefully written. A valuable contribution to study of the history of the caliphate, political Islam, the influence of colonialism, modern Egyptian political history, and secularization in Islam. It contributes to understanding the caliphate and current radical Islamist doctrines."—Choice
"Offers a lively analysis of one of the boldest Muslim thinkers of the early twentieth century. Her book will appeal to readers who are interested in the intellectual antecedents of contemporary liberal Muslim thought."—Journal of Religion in Africa