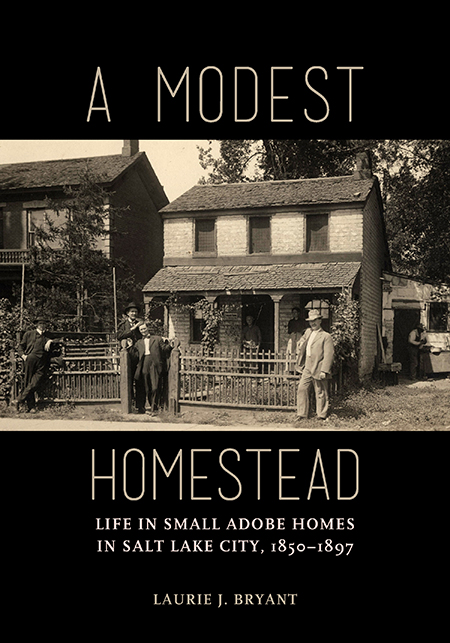 Stories of the ordinary people who helped build Salt Lake City emerge from a study of their often humble adobe houses. Rather than focusing on men and women in positions of power and influence, the emphasis here is on the lives of people who built their sturdy, simple homes from mud.
A Modest Homestead provides architectural descriptions of ninety-four extant adobe houses. These homes are for the most part unremarkable, except for their perhaps unexpected construction material. They are as basic as the people who built them—small tradesmen and farmers, laborers and domestics. Author Laurie Bryant discusses the neighborhoods in Salt Lake City where adobe houses have survived, often much renovated and disguised, and she showcases the houses not just as they appear today but as they were originally built. Almost all the houses now have additions and improvements, and without some dissection, they are not always recognizable. They now appear both comfortable and pleasant, which was not always the case in the nineteenth century. What emerges through closer examination and Bryant’s research is a fuller picture of the roughhewn life of many early Utahns.

Laurie J. Bryant is a transplanted Californian and retired paleontologist. After living in Salt Lake City for ten years, she was drawn to the city’s adobe buildings, and to the people who built them. With degrees in the earth sciences, including a PhD in paleontology, she enjoys solving puzzles and took great pleasure in the five years of research for this book.

“The author is a meticulous and creative researcher. She clearly has left no stone unturned.”
—Martha S. Bradley, author of Kidnapped from that Land: The Government Raids on the Short Creek Polygamists

“An avocational architectural historian has put together a substantive and data-rich volume that deserves celebration. The author conveys her passion for the topic, which is as much about the ‘little person’ as it is about their house.”
—Christopher W. Merritt, Deputy State Historic Preservation Officer, Utah Division of State History

“This book introduces the reader, and potential future researchers, to the use of adobe brick in Salt Lake City in an engaging manner that will be useful for a variety of people who follow Utah history. In and of itself, A Modest Homestead encompasses a rich array of information on the early pioneer families that will serve as a starting point for other researchers, and the methodology and resources Bryant employed will provide a precedent for similar histories in other communities.”
—Utah Historical Review
“Collectively the broad sweep [of the book] gives the reader a fair understanding of the bevy of challenges and hardships these 'common' early settlers endured as they faced marital issues, mental illnesses, and unemployment, and legal battles. The book is well researched and documented and is an important source in simply identifying these structures.”
—Western Historical Quarterly
“A culmination of six years of meticulous research…. This book offers informa­tion that will be interesting and valu­able not just to professional architects and historians but also to laypersons who wish to learn more about their pio­neer heritage, Salt Lake City’s history, or the history of the Church.”
—BYU Studies Quarterly