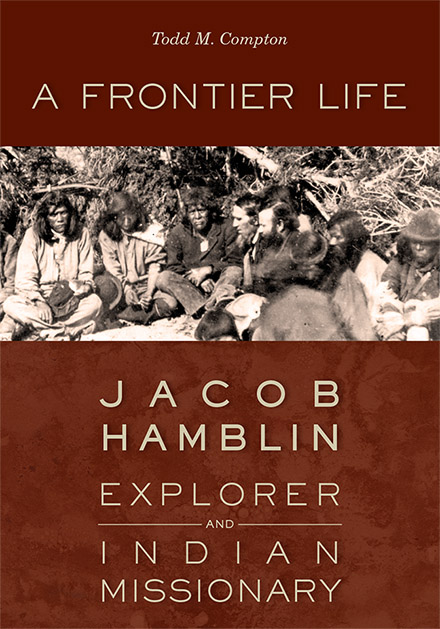 Winner of the Juanita Brooks Prize in Mormon Studies

Frontiersman, colonizer, missionary to the Indians, and explorer of the American West, Jacob Hamblin has long been one of the most enigmatic figures in Mormon history. In this defining biography, Todd Compton examines and disentangles many of the myths and controversies surrounding Hamblin. His Grand Canyon adventures and explorations as a guide alongside John Wesley Powell are well documented, as are his roles as a missionary, cultural liaison, and negotiator to the Indian tribes of southern Utah and Arizona. Hamblin struggled in this latter role, sometimes unable to bridge the gulf between Mormonism and Indian culture. He disavowed violent conflict and ceaselessly sought peaceful resolutions where others resorted to punitive action. He strove above all for mutual understanding in the absence of conversion.

A Frontier Life provides a rich narrative that fleshes out a picture of a sometimes vilified figure, particularly in regard to his connection to the infamous Mountain Meadows Massacre, where Compton provides nuanced discussion clarifying Hamblin’s post-massacre role—he was not present at the massacre, but reported on it to both Brigham Young and military investigators. Compton’s engagement with Mormon historiography and previous Hamblin portrayals will make this work of particular interest to both scholars and students. The casual reader will take pleasure in learning of a true pioneer who lived life at the geographical, cultural, and spiritual boundaries of his era. This dramatic, entertaining biography is a truly significant contribution to Mormon history.

Todd M. Compton specializes in Mormon history and the classics and has published numerous articles and five books in these areas, including In Sacred Loneliness: The Plural Wives of Joseph Smith and Fire and Sword: A History of the Latter-day Saints in Northern Missouri (coauthored with Leland H. Gentry.)
Table of Contents:
List of Figures
Preface
Introduction
1. “A Vast Unsettled Wilderness”: Growing Up on the Frontier, 1819–1841
2. “He Preached What I Had Long Been Seeking For”: Mormonism, 1842–1849
3. “My Wife Violently Attacted with Colery”: Cholera Country: Crossing the Plains, 1850
4. “When I Herd the Schreems of the Chirldin”: Becoming a “Messenger of Peace” in Tooele, 1850–1853
5. “We Ware Mormans Thare White Brothers”: The Southern Utah Indian Mission, 1854
6. “The Chief Shed Teers When He Saw Our Women and Children”: Founding Santa Clara, 1854–1856
7. “I Was Apointed to Take Charge of the Mision”: Marriage and Massacre during the Utah War, 1857
8. “The Gentiles Are Fiting Up Steamers to Explore the Colerado”: Encounter with Ives on the Lower Colorado, 1858
9. “In & Through the Roughefist Country It Has Ever Been My Lot to Travel”: Crossing the Colorado, Visiting the Hopis, late 1858
10. “Mr. Hamblin Has Discharged His Duty”: Collecting the Children and Second Expedition to the Hopis, 1859–1860
11. “Your Son . . . Partially Arose And Said Here I Am Shot”: Murder on the Trail and Flight from Quichintoweep, 1860
12. “I Want You to Give Dilligent Heed to This Letter”: Gathering the Bones, 1861
13. “The Last Vestige of the Fort . . . Had Disappeared and in [Its] Place Roar Now the Wild Torrents of the River”: The Big Washout, January 1862
14. “The Rocks Stand Up Biding Defiance to Wind and Weather in All Manner of Shapes”: Circling the Grand Canyon, 1862
15. “The Hight of the Rock and Its Smooth Surfis on Each Side P[r]esented the Seenery Grand and Sublime”: Founding Pearce’s Ferry, 1863
16. “A Raft Was Built on Which Bro Hamblin and Dayton Crossed”: Founding Lee’s Ferry and Callville, 1864
17. “Why She Ever Married ‘Old Jacob’ Was a Mystery”: The Death of Rachel and Marriage to Louisa, 1865
18. “I Never Was So Ashamed of Anything in My Life”: Murder and Massacre at Pipe Spring, 1866
19. “They Begged Him to Be Their Big Chief, Saying That They Had No Captains Left”: Re-founding Kanab and Boating on the Colorado, 1866–1868
20. “Started for the Canab Mision”: At Kanab and Pahreah, 1869
21. “We Will Now Ack Knowlage but One Father Suck the Milk of One Mother”: With Powell among the Uinkarets, and Treaty at Fort Defiance, 1870
22. “I Was Not Happy Unless I Was Miserable, For I Knew Nothing Except Hardships”: Rituals and Trials of a Missionary Family, 1870
23. “A Slow-Moving, Very Quiet Individual, Who Said He Was Jacob Hamblin”: Exploring the Escalante; Navajos in Kanab; At Lee’s Ferry, 1871
24. “They Died Off So Fast That There Were Hardly Any Left in a Short Time”: The Fate of the Santa Clara Paiutes, 1871
25. “Jacob Whiled Away the Evening ‘Yarning’”: Helping Powell and Lee, 1872
26. “We Wass the First Ones That Ever Crosed the Cilored with Wagons”: Mormons to Arizona, 1873
27. “The Indians . . . Were Murdered in Cold Blood by One Mccarthy and His Employees”: The Grass Valley Murders, Navajo Negotiations, and the Arizona Mission, 1874
28. “The Navajoes Carried on Quite an Extensive Trade with Our People”: At the Colorado Post, 1875
29. “If He Had His Choice He Should Desire to Live in Arizona”: Helping to Found the Little Colorado Mission, 1876–1877
30. “The Watering Places Are All Occupide by the White Man”: Hamblin, Powell, and the Kaibab Paiutes, 1877–1880
31. “He Had Always Led a Frontier Life”: Recircling the Grand Canyon; Counselor to Lot Smith, 1878
32. “I Am Now Located with a Part of My Family in Round Valley”: Springerville, Arizona, 1879–1882
33. “We Found a Nice Farm on the Frisco River”: New Mexico, Old Mexico, 1882–1885
34. “In a Small Cabin in the High Mountains of New Mexico”: The End of the Trail, 1886
35. Jacob Hamblin: Legacy
Appendix A: Jacob Hamblin’s Families
Appendix B: Jacob Hamblin’s Trips To and Across the Colorado
Notes
Bibliography
Index

Praise and Reviews:
“A magnificent new biography which will immediately become not only the standard biography of Jacob Hamblin, but also one of the greatest biographies in the fields of Mormon and Utah history. Exhaustively researched and documented, and judiciously interpreted.”—Gary Topping, editor of If I Get Out Alive: World War II Letters and Diaries of William H. McDougall Jr. (The University of Utah Press, 2007)

"Todd Compton comes at the current project with previous experience in the biographer's craft. His eye for detail, obvious in his previous writing projects, is evident here also. Jacob Hamblin's eventful life has finally received a fitting chronicle."—Association for Mormon Letters

“Although many authors have analyzed the life of Jacob Hamblin, none have succeeded to the degree that Todd M. Compton has. He has done a masterful job of researching and documenting the totality of Hamblin’s experiences, examining and disentangling many legends and controversies and offering cogent, insightful interpretations of the key moments in his life. In sum, this work represents the most scholarly treatment of Jacob Hamblin to date.”—BYU Studies Quarterly

“Compton’s biography is a masterful addition to our understanding of the conflicted, often paradoxical, but always religiously devoted Jacob Hamblin.”—New Mexico Historical Review

“The biography includes 127 pages of notes that are valuable and of great interest to the careful reader looking for scholarly references and additional insights into the life and times of Jacob Hamblin. The extensive nature of the notes demonstrates the wide-ranging research on which the book is based. …This book is a most valuable historical contribution.”—Utah Historical Quarterly

“Compton’s biography, the first full-length scholarly treatment of Hamblin’s life, presents a positive reevaluation, while not ignoring the frontiersman’s flaws. Compton expertly analyzes Hamblin’s evolving attitudes toward Indians, showing how the missionary gradually became the ‘Apostle to the Lamanites.’” —The Juvenile Instructor: A Mormon History Blog