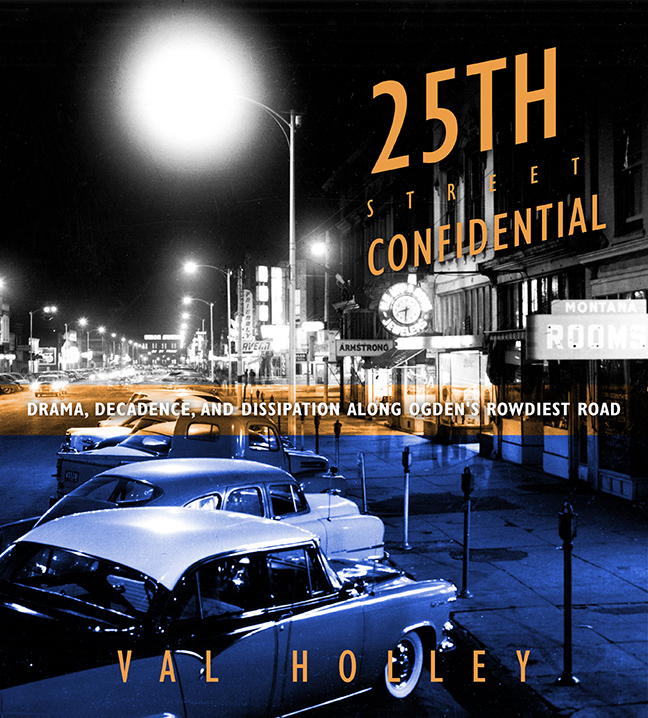 Generations of Ogdenites have grown up absorbing 25th Street’s legends of corruption, menace, and depravity. The rest of Utah has tended to judge Ogden—known in its first century as a “gambling hell” and tenderloin, and in recent years as a degraded skid row—by the street’s gaudy reputation. Present-day Ogden embraces the afterglow of 25th Street’s decadence and successfully promotes it to tourists. In the same preservationist spirit as Denver’s Larimer Square, today’s 25th Street is home to art galleries, fine dining, live theater, street festivals, mixed-use condominiums, and the Utah State Railroad Museum.

25th Street Confidential traces Ogden’s transformation from quiet hamlet to chaotic transcontinental railroad junction as waves of non-Mormon fortune seekers swelled the city’s population. The street’s outsized role in Ogden annals illuminates larger themes in Utah and U.S. history. Most significantly, 25th Street was a crucible of Mormon-Gentile conflict, especially after the non-Mormon Liberal Party deprived its rival, the People’s Party, of long-standing control of Ogden’s municipal government in 1889. In the early twentieth-century the street was targeted in statewide Progressive Era reform efforts, and during Prohibition it would come to epitomize the futility of liquor abatement programs.

This first full-length treatment of Ogden’s rowdiest road spotlights larger-than-life figures whose careers were entwined with the street: Mayor Harman Ward Peery, who unabashedly filled the city treasury with fees and fines from vicious establishments; Belle London, the most successful madam in Utah history; and Rosetta Ducinnie Davie, the heiress to London’s legacy who became a celebrity on the street, in the courts, and in the press. Material from previously unexploited archives and more than one hundred historic photos enrich this narrative of a turbulent but unforgettable street.

Winner of the Utah Book Award in Nonfiction.
Chosen by Foreword as a finalist in the regional category for their IndieFab Book of the Year Award.

Val Holley is a native of Weber County, Utah, attended Weber State College, and received a BA in journalism from BYU, a JD from the University of Utah, and an MLS from the Catholic University of America. For three decades he has been a law librarian and an independent historian in Washington, DC. He is the author of James Dean: The Biography and Mike Connolly and the Manly Art of Hollywood Gossip.

Praise and Reviews:
“Captures the sense of the street and its vitality. A significant contribution to the history of one of Utah’s most important cities.”—John Sillito, coeditor of A World We Thought We Knew: Readings in Utah History (The University of Utah Press, 1995)
“Holley presents a history of Twenty-fifth Street just as compelling as the legends. The book lives up to its subtitle, and readers will find a historical basis to some of the Twenty-fifth Street legends while others are discredited. This work of local history offers a sound illustration of themes, trends, and events that dominated the country as a whole from nineteenth century to the present day.”—Utah Historical Quarterly